Over the weekend, Paul and I were in Indiana to continue packing up the house, which sold rather quickly (not complaining about that!). Saturday night, we returned home after a very late supper and were greeted by a dog who was most definitely not Choppy on the front porch.

As it was late, we put the stray dog in our backyard. He was wearing a collar, but he didn’t have any tags, so I couldn’t call a worried owner to come get him. And I wasn’t about to let the dog wander the neighborhood, where he could have easily found his way into traffic and a painful end. It seemed like a good compromise: he would be safe and sound in our fenced backyard for the night, where I could get him some food and water; my house would be safe and sound from an unknown dog who might not be housetrained or even used to being inside at all.

So, that situation lasted about four minutes. The dog barked a few times, and I let him inside.

It turns out, I didn’t have to be worried about this dog: he contentedly slept the night away without trouble or accident. He got along with Choppy and proved himself to be a sweetheart and no trouble at all – this definitely was someone’s missing pet.

On Sunday, after finding nothing about a missing dog matching the stray dog’s description on any of a number of websites, I was down to the last hope: it was time to take the dog in to the humane society to see if he had a microchip. He was so sweet, and so obviously loved people, I hoped his owner had taken the quick and easy step to get a microchip.

As the woman at the local humane society swiped the microchip wand over the dog – checking everywhere, in case the chip had migrated – it became painfully clear that this stray dog didn’t have a chip. There wasn’t going to be an immediate happy ending for this guy. I handed him over to the woman at the humane society, hoping that in the next few days, someone would come looking for this happy, easy-going fellow. I told the wonderful workers at the humane society to call if something came up, and Paul and I headed back to Wisconsin.

It’s been almost 24 hours, and I haven’t heard anything. If no one comes to claim the stray dog by the end of the week, he’ll be put out for adoption, hoping to find a new, forever home. I really hope that someone comes to get him before then, both because he should go home and because if no one claims him, poor Paul is going to have a wife who will be trying to convince him that we need another dog.

You can also follow our blog by clicking the “Follow” link at the top of this page or at Bloglovin’! 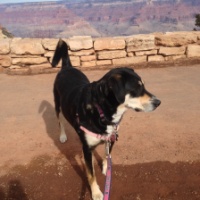 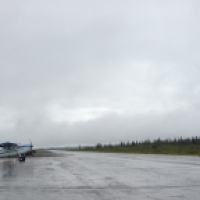 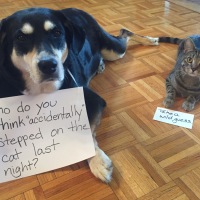