The reason this trip is starting in New Orleans is simple: I wanted to have Choppy march in a dog parade.

Yes, I realize that is a strange reason to take a trip somewhere. And yes, I realize this is yet further evidence that I am a crazy dog lady. But how often do you get a chance to parade through the streets of the French Quarter with your dog dressed in a tutu? OK, maybe don’t answer that. Dogs wearing tutus would be perfectly at home in the French Quarter any day of the year. It’s just more appropriate during Mardi Gras, when it is not just expected behavior, but encouraged behavior.

And so, today, Choppy and I marched with the Krewe of Barkus, in a dog parade through the French Quarter in New Orleans.

I cannot stress to you how much fun this was.

Choppy during the parade. People regularly ask me if she likes to be dressed up; I may well use this picture to show others how much she enjoys being dressed up, as she certainly looks happy to be in the parade and the tutu in this picture. Of course, she may be miserable inside, but the joy of a dog is that they can’t actually tell you how they feel, so you can make up feelings for them.

In the end, the parade is simple: you walk through some streets of the French Quarter, tossing beads to kids and hoping your dog doesn’t attack either a dog or a child. I am happy to say that, despite a few minor disputes with other dogs, Choppy passed both tests with flying colors. The weather was spectacular – sunny, mid-70s, and no weather to speak of. Pretty much all you can ask for in a day.

After the parade, Choppy and I wandered through the French Quarter and nearby areas a bit, ending up at Tchoupitoulas Street, where I got the obligatory photo op of Choppy and the street after which she was named, before heading back to the hotel.

Choppy and I are leaving New Orleans tomorrow morning, but we will be back soon. Sadly, despite our looming return, there will be no dog parades in Choppy’s immediate future. I guess it’s just a reason to come back next year.

6 thoughts on “Dogs in the Parade” 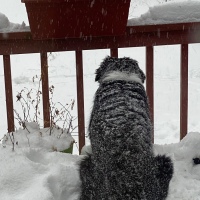 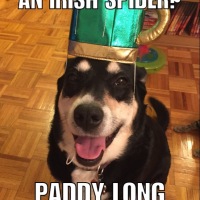