I am horrible at packing. Just horrible.

The topic of packing comes up because this weekend, Choppy and I are going to visit Cleveland for three days and nights, as I apparently believe that when the temperature in southern Indiana is struggling to get above freezing, the best place to go as a break from that weather is Ohio.

In case the facetiousness of the previous statement is not obvious, I’m actually visiting Cleveland to see a friend, and the weather this weekend is forecasted to be downright beautiful compared so some previous trips I have made to Cleveland, where I once saw cars abandoned in the middle of the Interstate during a snowstorm, probably because their owners couldn’t think of anywhere more dangerous to other motorists to leave their cars when the road was already down to one lane (at best) and icy to boot. Not that the forecast really matters, because much of the weekend will likely be devoted to watching the Tournament from the comfort of an indoor location with beer (which sounds just fine with me).

Now, despite having spent more than half of this year on the road, and despite having traveled all over the world over the course of my lifetime, I have never been good at packing. I see people traveling with one suitcase, and I wonder how in the world they can do so, even if they are only on a weekend trip (usually, I suspect they sent the rest of their clothing ahead via FedEx).

It’s not that I can’t pack lightly, as I have regularly been forced to do so due to traveling circumstances. But I hate doing it, and I am horrible at it as well: I regularly forget entire categories of clothing when I have to pack lightly, accidentally leaving all my underwear at home and having to make an emergency clothing run before I can do anything else on the trip.

But when I am in the car, or otherwise not constrained by a small suitcase requirement, my packing woes multiply, as I figure I should bring more, lest I forget something I might want while I am away. And so, you have situations like this weekend. I am (slowly) getting things packed, and will likely finish packing in a frenzy sometime tomorrow morning approximately three minutes before I get on the road (it’s an approximation because there is a strong likelihood that I might be finished less than three minutes before I get on the road). However, in the meantime, I have illustrated some of my problems with packing in the pictures that follow. 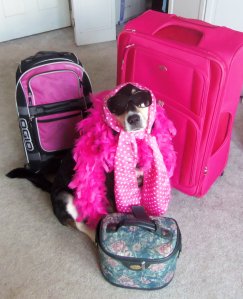 These are the suitcases I am taking this weekend (and Choppy. In case the random dog wasn’t obvious as not being a suitcase). In my defense, the smaller pink suitcase is for Choppy’s stuff, so I really only have one suitcase, and one bag for my toiletries. OK, so that’s probably not much of a defense, considering the size of the suitcase I need for three days, that it doesn’t include my toiletries and the fact that I am packing a suitcase for my dog. The last of those three probably has no defense. Except insanity (hey, it counts as a defense! A bad one, maybe, but a defense nonetheless). Also, not the same picture as previously appeared on Choppy’s Facebook. Though very, very similar.

Here’s where most of the packing problems arise. Not pictured: far too many other pairs of shoes I own. It’s probably a problem at this point. 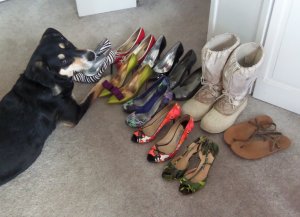 Here are the shoes that made the first cut to go on the trip. Because, obviously, when going to Cleveland in winter for three days, you need ten pairs of shoes. Including camo sandals. Obviously. (Note: Choppy appears to share your incredulity as to the previous statements regarding this picture, and would likely suggest the giant boots that I have been wearing since I was in middle school are all one really needs when visiting Cleveland this time of year).

After the hard work of getting my shoes down to a reasonable first try number, I decided to stop packing (and/or sit around for a bit and attempt to justify bringing all the shoes. My first attempt at justification suggests that  boots and flip flops don’t count as shoes, and therefore I am down to eight pairs of shoes, which seems like a much more reasonable number of shoes for three days). Likely, this will mean I don’t get back to packing until tomorrow, at which point I will just start throwing things in the suitcase (yet another bad packing habit), and will probably forget something that, like the camo sandals, is totally necessary for the weekend in Cleveland.