I started 2013 by taking a trip to Florida to enjoy some warm weather and some football (a fantastic trip, punctuated by four hours of a horrible, horrible football game). While at a rest area in Florida, I came across a rather disturbing sign warning of poisonous snakes inhabiting the rest area. Now, I have seen a lot of snakes in the wild over the years, but I can’t say that I have seen any (that I recall) at a rest area. I sort of viewed the sign as an aberration, considering the rest area in question had several ponds and seemed like prime snake habitat.

Turns out? The Florida rest area was not an aberration. The rest areas of the United States seem to be infested with snakes, if the signs at said rest areas are to be believed.

I have been posting these pictures on Facebook, but considering the sheer number that I have now come across, I feel that they deserve their own blog post. And, if history is any indication, there will quite likely be another blog post on these in the future.

The sign that started this all off. Note that there are picnic shelters in this snake-infested area, which suggests that other people see signs like this and think things like, “You know what would be good? Instead of finding a pleasant, quiet, safe park somewhere, let’s take the kids and have a picnic here at this rest area right next to a major interstate highway that is infested with snakes. I am sure it will be great! Much better than the other option!” Contrast this with me, who refused to so much as step into the grass upon seeing this sign.

The best part about the Florida rest area with the sign above? The ponds at the same rest area were inhabited by alligators, but there weren’t any signs warning you about getting close to the water. Or warning against messing with the alligators out of the water, for that matter. See that guy chilling there in the sun? Mere feet behind the sign above. Granted, there was a fence in between, but I am pretty sure it didn’t go all the way around the pond. And so what did I learn from this? People in Florida may have their priorities on potential dangers mixed up. And avoid rest areas in Florida. 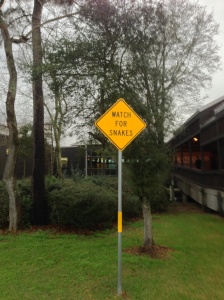 Moments after crossing into Texas (and after expressing extreme joy at a speed limit far higher than elsewhere in the country), I stopped at a rest area and saw this sign. As you can see, Texas doesn’t let you know whether its snakes are poisonous or not, nor does it warn you to beware of them. Really, they just want you to keep an eye out for them. This being Texas, I presume the “then please shoot them” portion of the sign is implied, and probably was only left off to save the cost to the state of adding letters/making the sign larger. 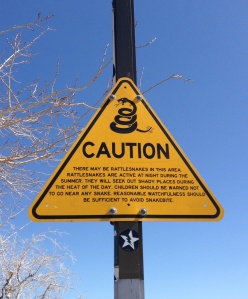 Like Texas, the first New Mexico rest area I visited had a snake warning. New Mexico’s snake warning gets points for (a) the uber-scary picture of the snake on the sign, and (b) suggesting that kids are more apt to be bitten by snakes than adults and should get special warnings about them. However, the sign doesn’t let you know whether this is because kids are dumb and think that hissing, rattling snakes curled up looking ready to strike just want to make friends, or whether this is because rattlesnakes just prefer kids as victims. I prefer the latter explanation. It makes the snakes scarier.

Upon getting to Arizona, I had high expectations for the sort of snake warnings I would see. In my mind, the state most equated with poisonous snakes is Arizona. I pretty much assume that you will run into a rattlesnake under every saguaro (which doesn’t stop me from hiking around them. Relatedly, the number of snakes I have seen in the Arizona wild currently stands at zero, and I have been going to Arizona regularly since I was a little kid). So, it came as somewhat of a disappointment that the first sign I saw warning of animals at an Arizona rest area was this warning about the bees. The signs were posted around garbage cans, implying that these are just regular old bees looking for sweets, rather than the killer kind who might merit a sign. Weak, Arizona, so weak.

And then, at the last rest area in Arizona, I came across this sign. Not to be outdone, Arizona warned me not only of the presence of poisonous snakes, but poisonous insects as well (well, I suppose that partially depends on how you read the sign. Obviously, you should read it in the most terrifying and potentially deadly way possible). However, I saw neither, and two days later made it home safely and soundly, despite my multitude of visits to the most dangerous places in America: rest areas.

24 thoughts on “Dangerous Rest Areas Across the Country”